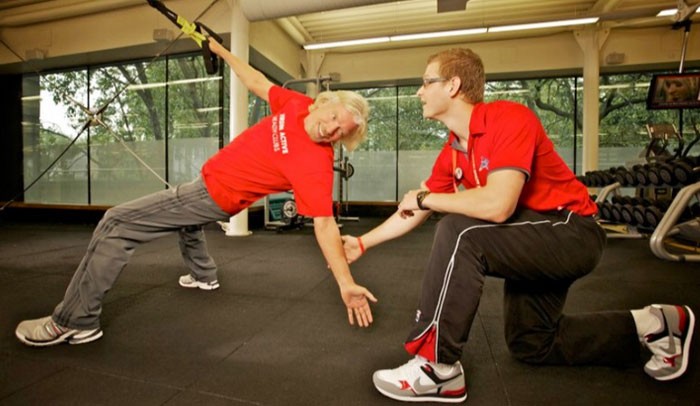 Changes in personal training and the fitness industry

Written by ckgdmtonguenew2017 on August 4, 2017. Posted in Articles

Whilst working with my clients in Nottingham recently, I found myself reminiscing about previous celebrity clients that I have trained in the past and shared my experience of training Sir Richard Branson for his 60th kite surfing challenge (that eventually got cancelled). It made me reflect on how things have changed since then – both for me personally as a personal trainer and in the fitness industry as a whole.

For me personally I have since set up my own Personal Training Business in Nottingham and have also become a UK Master Trainer for the companies that promote ViPR, TRX and Powerplate. This was big change for me, but change is mostly good in my opinion and working for myself has given me the time to hone my craft and become a better husband and father.

Cardiovascular gym machines generally only allow movement in one direction. Weights machines allow only one motion path and tend to isolate one or two joints. Take the most popular cardio machines in the gym, the treadmill, the bike and the cross trainer. These machines limit your direction to forwards and backwards motion, they are rhythmical and predictable. In the real world where our bodies are pushed to full ‘functional capacity’ it is likely that we will need to move in all directions, we will have a broken rhythm and there will be an element of unpredictability. A great example of this is a team sport, you will have a 3D area that you will need to cover, play will vary in pace and you will need to react to an opposition. Even taking your run off the treadmill and outdoors has a big impact on your ‘functional capacity’. Outdoors will involve more direction change, obstacles that require pace change and unpredictable surfaces, all of this is enhanced stimulation for your five senses.

Gym machines were designed to exercise specific muscle groups. As time has passed it has become widely accepted that our brains do not recognise individual muscles but it remembers and repeats movement patterns. That means that when you are performing a lunge exercise your brain does not tell your Quads and your Glutes to work but it fires off the ‘step’ sequence. In order to improve our co ordination, agility and our general body awareness we need to perform exercises that stimulate the following movement patterns push, pull, bend, twist, sit, step and types locomotion. These movements are restricted by machines.

When lifting weights in the gym we are encouraged to lift weights slowly with control and perfect posture, focusing on our breathing and the working muscles. In reality when we are performing functional tasks we give none of those things a second thought and instead we are focused on the task in hand which could be anything from scoring a goal to painting the ceiling. In functional tasks, rather than a controlled lifting and lowering of mass, we learn to control momentum. We create acceleration and then bring that force to a controlled stop. Throwing is a great example – you may take a run up and then brake hard with your legs whilst encouraging the projectile to continue at top speed. It is unlikely that you will have perfect posture, think about your breathing technique, or suck in your core muscles – all of that happens on auto pilot anyway. When we train therefore it is good to vary the speed, the direction and the position you lift weights in. It also makes training more interesting, demanding and dare I say ‘fun’.

I hope you can now see why more and more of our gyms are opening up space to allow you to use functional training tools and reducing the space dedicated to weights. Weights machines are not dead, if you want to lift heavier and heavier weights they are a safe method of doing so but if you want to stimulate your ability to move and sense the world around you, go functional.