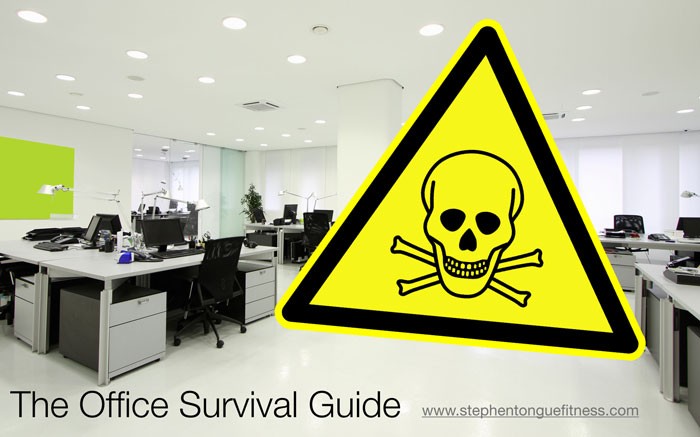 Many of my clients are based in an office environment. Whether small businesses or large corporations, recent research has shown that the impact of spending too much time in this environment can impact your long term health. In this article I explore the potential problems the office can cause and suggest some strategies to minimise the risks.

So what is it exactly that is causing the health problems in an office environment. I have highlighted three problem areas that need addressing, seated desk work, food culture and stress.  Let’s take a closer look at these areas one at a time.

On the whole our working lives are becoming more sedentary as time goes by. A large amount of our country’s work force is desk based. Many occupations require a lot of seated travel and even digging up a road requires sitting in a little tractor. If you imagine what a days work might look like 1 million, 1000 and even 100 years ago it paints a very different picture in terms of physical activity. It’s this level of inactivity and in particular being stuck in a seated position for long periods which is proving to be hazardous for our health.

A recent survey of 2000 office workers found that 78% of office workers felt that they spent too much time seated at their desk. Furthermore the survey went as far as revealing 38% of workers email colleagues sitting close by, 31% put off going to the toilet to stay at their desk and 52% regularly eat lunch whilst at their desks. 45% of women and 37% of men spend less than 30 mins per day walking around at work, taking the average working day as 8.5 hours that’s 8 hours of inactivity. These stats really highlight the inactivity prevalent in the office environment.

Periods of sitting still for 4 hours or more are what seem to pose the greatest risk to health. The body can respond on the following ways:

So what’s the significance of the bodily responses? If repeated over time this can lead to increased risk of many diseases including:

Muscles burn less fat and blood flows more sluggishly during a long period of sitting, allowing fatty assets to more easily clog the heart. Prolonged sitting has been linked to high blood pressure and elevated cholesterol. People who sit more than 8 hours per day are twice as likely to have cardiovascular disease than those sitting less than 4 hours. Regardless of how physically active a person is.

A 2008 study found that people who sat for longer periods during their day had significantly higher levels of fasting blood glucose, indicating their cells became less responsive to insulin. In 2013 a study came to similar findings and arrived at the conclusion that for people already at risk of developing type 2 diabetes, the amount of time spent sitting could be a more important risk factor than the amount of time spent vigorously exercising.

Breast and colon cancer appear to be most influenced by physical activity (or lack thereof): a 2011 study found that prolonged sitting could be responsible for as many as 49,000 cases of breast cancer and 43,000 (1,800 cases) could also be related to excessive sitting.

It comes as no surprise that regular periods of inactivity can lead to weight gain and can increase the populations levels of obesity. A 2013 British study showed that using a standing desk caused the heart to beat an average of 10 beats faster per minute when compared to sitting. This equates to an additional 50 calories per hour burnt. A 2012 study comparing young adults using sitting and standing desks found that standing desk users burned 20.4 additional calories per hour. Taking an average of 3 hours of standing per day, 5 days per week, this would equate to burning an extra 306 to 750 calories per week; 16,000 to 30,000 per year.

Often referred to as brittle bone disease Osteoporosis is the gradual reduction of bone density leading to increased risk of fractures. Bones rely on movement and the stimulus of force to maintain their strength, inactivity over time will lead to a gradual reduction in bone density. Scientists partly attribute the recent surge in cases of osteoporosis to lack of physical activity.

When we are sedentary for long periods everything slows including brain function. Whilst research linking physical inactivity to dementia is still at the early stage, evidence is growing to suggest that it could be a contributing factor. A recent American study concluded that some, but not all sedentary behaviours are linked to adverse mental health. There is also evidence to show that remaining active can reduce the likelihood of depression with the strongest links being made to walking outdoors as being a key preventative measure.

As you can see from the above, remaining seated for 4 hours or more is the key issue. Although regular workouts do offer many benefits to your health, hitting the gym several times per week and being seated for the remainder is not enough to lower your risk of all conditions. A combination of low level activity (keeping moving) and exercise seems to be optimum for health. Some of the latest fitness gadgets such as the Fitbit or Apple Watch even go as far as notifying you if you have had long periods of inactivity as a reminder to move.

I have worked with many office employees and I am well aware of the influence that the office environment can have on your diet. In my opinion large offices tend to be worse because snacks are often provided as rewards as well as for meetings. Office snacks usually comprise of biscuits, cakes and crisps. In large companies it’s always somebody’s birthday and so cake is often doing the rounds (cake is only calorie free on your own birthday).

A recent survey found that…

Most employees (92%) have lunch (usually sandwiches – 68%) but don’t drink enough during the day. Fluid intake levels are below what they should be for optimum health and performance (with only 11% having the recommended eight or more drinks during the working day).

78% are regular snackers, but more than half of these snack on crisps and biscuits (20% and 27% respectively), “which have extremely limited nutritional value to support productivity,” says Matt Barker – an independent performance and nutrition specialist who helped BaxterStorey analyse the survey findings and put a figure on lost productivity.

Poor nutrition not only has negative impacts on your body but may also hit your companies bottom line. An estimated £8.1bn or equivalent of 97million working days in England, Scotland and Wales are lost due to poor productivity as a result of either skipping meals or snacking on sugary foods such as biscuits.

Rule number one of eating a healthy diet is ‘if it’s there, you will eat it’. Decide what you want to eat for the day before you get to the office, prepare it at home or leave early and pick it up on the way in. Buy a large bottle of water, some healthy snacks (such as fruit and nuts) and a nutritious lunch. Lay your goodies out on your desk and pick at them at will in the good confidence that it’s all super healthy.

Push back the peer pressure

Saboteurs are plentiful in the office. Don’t let anyone else sabotage your best efforts by sticking biscuits under your nose or telling you that you’re ungrateful for not eating their birthday cake. If your strong minded just politely decline and eat your healthy snacks. If your will is weak often telling a white lie works such as pretending that cake gives you stomach pains.

Don’t be ignorant to instinct

Several surveys have shown that office workers will work through thirst, hunger and even natures calls when working to a deadline. Don’t be that person. Ignoring those instincts will only be to the detriment of your productivity and health. Your body will give you all the signs to express what it needs, what you must do is learn to act swiftly on them if you’re going to remain physically and mentally on the ball.

Work related stress is a huge problem with some of the greatest contributors of stress being workload, people issues and juggling work / life balance. Work related stress can effect your health in many ways including depression, anxiety, fatigue, blood pressure and even cravings for food, cigarettes and alcohol.

Here are some of the stats…

In order to make impressions and show your worth you may be tempted to say ‘yes’ to every project, task and errand that is asked of you. Not only will this crowd your workload but taking on too much may backfire and cause stress, low quality work and possibly failure. This is the opposite of what you’re trying to achieve. If you’re already under pressure confidently say ‘no’ and justify your rejection professionally and offer alternative solutions.

If you feel that the pressure on you is rising look out for signs of stress and speak to someone about it before it’s too late. Talking to work colleagues, friends and even medical professionals is very useful. Even the conversation itself may help you feel better, you may also get some good advice too. Signs of stress can include sleeping problems, sweating, loss of appetite, difficulty concentrating, anxiety, irritable moods, low in self esteem and you may have racing thoughts, worry constantly or go over things in your head. You may notice that you lose your temper more easily, drink more or act unreasonably. You may also experience headaches, muscle tension or pain, or dizziness.

Exercise can help you combat the effects of stress. Not only does it have all the physical benefits but many report that exercise is good mental time out and offers a break from other external pressures. Working with a personal trainer takes away the decision making of what you need to do in the gym and provides you with the motivation you need to go and do it.

As depressing as it sounds the office has the potential to be the slow death of you. The office can also be a healthy and happy environment if you implement a few simple changes and follow my advice above. Not only can you increase your chances of living longer but also of being fitter, happier and healthier.