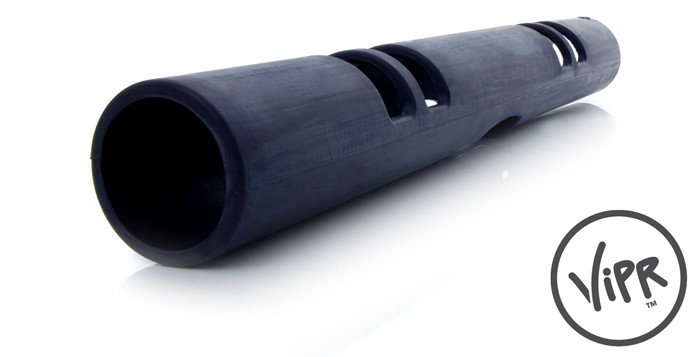 My fitness training style is very much influenced by a passion to help people move well and so the beginnings of the ‘functional training’ trend got me very excited. I remember sitting in a lecture by Michol Dalcourt (ViPR inventor) at the FitPro Convention back in 2009 where he first revealed the ViPR in the form of a video. The video showed an athletic looking male performing all types of weird and wonderful exercises, the moment I saw the motions that this tool could drive I wanted to get involved…

A year later I was lucky enough to be invited to a private ViPR training course presented by Michol. The course was specifically to launch ViPR at the health club chain I was working for at the time. That weekend Michol showed us the true potential of the ViPR for all levels of client and the seemingly limitless variables it could produce. I was hooked and the ViPR was a hit at gyms up and down the country.

I have always looked up to the ViPR NT team and have been inspired by their innovation and so when a position was advertised on Twitter for a new member of the team I didn’t hesitate to reply. I was surprised and delighted to be invited to the ‘ViPR Bootcamp Recruitment Day’.

On the day of the bootcamp I arrived at fitpro HQ to be introduced to a room full of 15 fitness trainers of the highest calibre. Each trainer successful, knowledgeable and innovative; it was an inspiring environment to be in. Throughout the day we were constantly challenged. Our presentation skills were tested and analysed, our bodies were ‘beasted’ by the ViPR and our imaginations were pushed to the point of meltdown. I won’t lie, it was a tough, exhausting day./

Several weeks later after being left on tender hooks I received an email to inform me I had been selected for the team, I was absolutely buzzing with excitement. Initially I was invited to Fitpro HQ for four days of intensive ViPR NT training.

On the first day the whole team was brought together. The team leader Adam Daniel kicked off the event with an inspiring video which demonstrated the roles, responsibilities and team ethic of a flock of geese! The co ordinated effort of a flying flock of geese was more impressive than I ever imagined. More experienced members of the team went on to deliver equally impressive presentations on The Fitness Education System and Running Technique Analysis. In the afternoon the team got their training kit on and were giving a sneak peak at an impressive series of Movement Prep program’s produced by American Master Trainer Nick Luciano. The day was rounded of with a team meal at Canary Wharf which regrettably I was unable to attend.

The new members of the ViPR team attended the live component of the ViPR Certification lead by Adam Daniels in a North London venue. The workshop was attended by some great trainers that had energy and enthusiasm in abundance. Despite having done the course before I walked away with some fantastic new exercises which the group produced and that I could never have thought of on my own.

After a days rest from the live workshop my body was barely recovered from the 8 hour workout it had endured. Legs, bum and back muscles were tender to the touch but ‘no rest for the wicked’, there was more work to be done. The third day was a painstaking process of going through the ViPR certification program in intricate detail. The team had the opportunity to pick the brains of team leader Adam and ask every ViPR related question we could possibly think of. Needless to say at the end of the day we were exhausted from the overwhelming amount of information and were sent home with further study to prep for the final day.

On the final day the new members of the team had to teach the ViPR certification to each other. This was much more intimidating than I imagined, presenting to a group of knowledgable trainers that were assessing your performance and giving you direct feedback on its quality. It really brought home the challenge that being a ViPR NT presents and the personal growth I will experience through being part of the ViPR family.

To complete my official sign off as ViPR NT I will have to deliver another 3 workshops both as part of a team and as a solo presenter. The workshops will need to be of the highest standard and will no doubt push my presenting skills to the next level. This year I will also get to experience the many other benefits of being in the ViPR team including lots of great training kit, access to great education program’s and private audiences with some of the best fitness presenters in the world. Bring on 2013, I’m ready.